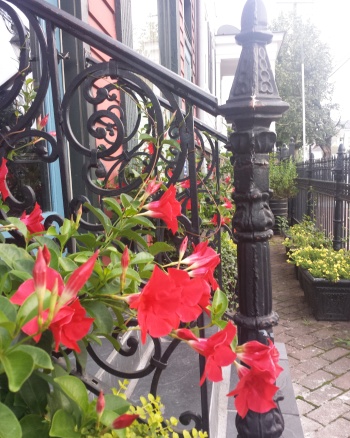 Virginia’s state capital, Richmond, is often over looked for the more touristy destinations like Arlington, Williamsburg and Virginia Beach.

However, not considering this revitalized city would be a mistake.

We chose to go to Richmond for many reasons including the chance to eat at one of our favorite restaurants, Peter Chang’s.

Richmond is full of history and many pieces of that history are on full display throughout the city, but some are more subtle like the cast iron handrails in the picture to the left and need to be found to be enjoyed.

On our trip, we drove the easy five hours up the interstate and headed straight to a park because we were traveling, of course, with our dog named Piggy.

The first park was called Pony Pasture Rapids Park. It was right next to the river and had great trails through the woods. A word of caution: after rain, the paths are very muddy.

Richmond is just now becoming a foodie scene and along with that comes breweries. We love breweries, as I have said before, because they are usually pet friendly, the beer prices are often never higher than $5 for a pint and it is great to see the varieties of beer the brewers create. We also love the laid back atmosphere.

Some of the breweries we enjoyed in Richmond include Strangeways Brewing, Legend Brewing, Center of the Universe and 7 Hills. Each had their own variety of beer and own special atmosphere to enjoy.

One of the restaurants that we tried while in Richmond was a place called The Roosevelt. It is located in the Church Hill neighborhood, one of Richmond’s oldest and prettiest neighborhoods, where young people are coming in and renovating old, historic homes and rejuvenating the area. 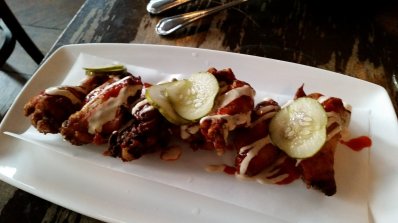 The Roosevelt has great food, especially on their appetizer menu. Sometimes, if an appetizer menu is unique and sounds better than entrees, we often just skip the main course and order a number of small plates to share. It is sometimes the best way to really enjoy a menu. For our trip, we enjoyed the southern poutine, the shishito peppers with guacamole, the scallop crudo and the smoked chicken wings with housemade hot sauce and white barbeque sauce. Each bite was divine.

One of the reasons we took the trip to Richmond was to enjoy not one, but two of Peter Chang’s restaurants. One is in the suburb, Short Pump, and one is in downtown. We have been to the one in Short Pump before and couldn’t wait to go back.

We stopped there for lunch and enjoyed Dan Dan Noodles and two very spicy meals – one with beef and peppers and one with a Schezuan style stir fry.

For dinner, we went to the downtown location, which had a more “hip” vibe and was very crowded. We had the crispy pork belly, scallion bubble cake, smoked duck with sweet peas and chicken with pickled peppers and potatoes. All the dishes were good, but I definitely prefer the Short Pump location for both its food and its atmosphere.

We only had two days in Richmond and there were a ton of things that we didn’t get to see or do. We did make a short stop into the eclectic Cary Town neighborhood and a few other parks for Piggy, but we didn’t spend time looking at the historic monuments, trying other great restaurants and learning more about Civil War history.

I can’t wait to go back.