Nashville is known as Music City. The bars downtown are full of country music lovers and musicians hoping to make it big. I am neither of those. The best part of a country song is when you play it backwards and the singer gets their car back, their dog back and their girlfriend back. (yes, I know that is a horrible joke.)

It was supposed to be an easy two hour drive down the interstate from Bardstown, Kentucky, but instead it turned into a harrowing ride through a construction zone that was closed for the weekend (but didn’t stop people from slowing down to a crawl) and through a torrential downpour where we couldn’t even see the road. Did I mention that there was also a tornado warning surrounding us? Did I also mention that the storm was following us and we couldn’t even escape it? 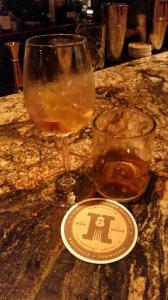 Either way, we made it safely to Nashville after nearly five hours instead of the planned two.

After the rain stopped, we decided to head first to Husk Nashville for a drink. We have been to Husk in Charleston and absolutely loved it, so we couldn’t pass up a chance to check out the second location. The restaurant is in a beautiful old house with multiple levels. The menu looked as good as it did in Charleston and I was bummed that we couldn’t get an appetizer, but it was just too close to dinner.

For dinner, we had reservations at the in-demand hot spot Rolf and Daughters. This Italian place is better than any Italian place that you can think of. The chef makes the pastas and serves them with a variety of ingredients. There are communal tables and a great drink menu. There are small sharable plates and the menu is constantly changing.

When we were there, we enjoyed the cassoncini (fried ravioli) filled with ricotta and Swiss chard. The fried pillows of deliciousness were topped with a slice of lardo and pecorino cheese. We also enjoyed a crostini topped with rapini, pecorino and pistachio; the ruby red shrimp salad and some housemade bread.

For our dinner, we were told that most people order one pasta and one protein. We almost went that route before Brandon had the GENIUS idea to get two pastas. We decided on the nettle tagliatelle with an egg yolk, bottarga and spring greens and the garganelli verde with a heritage pork ragu. Every single bite was heaven. The homemade pasta was perfect and we could have licked the bowls clean. For dessert, instead of ordering something sweet, we ordered another round of the cassoncini…because they were so amazing.

After dinner, we cruised the music strip to see what was going on, but decided in the end that our hotel beds were the best place for us.

The next day, we enjoyed the Nashville Farmers Market that had just opened for the season, got a few goodies and then hightailed it to Hattie B’s Hot Chicken.

There are two locations of this delicious restaurant and there is always a line, no matter what time you go. We showed up before opening, got in line  and waited for the FAMOUS Nashville hot chicken.

Hot chicken is chicken pieces cut up, fried and then covered in a special hot sauce. It is served on white bread toast with pickles. We got the medium, but really could have taken it hot. My husband was in heaven with this dish.  In fact, he craves it almost every day.

After our delicious lunch, we checked out a bit more of the city and then headed back on the road.

Most people only think of Nashville as a city full of country music, but it is really becoming a foodie destination. Top chefs are opening up shop and creating magical dishes and food staples such as hot chicken are in high demand.

So, even if you aren’t a fan of country, plan a trip to Nashville …but make sure to go with an empty stomach so you can enjoy all the goodies.

One thought on “Music city is more than just music”